Going to the Roadshow!

Today I will be attending the taping of Antiques Roadshow in Virginia Beach, Virginia. As a fan of the show, I am fascinated by the vintage and antique items people find, the stories behind them, and what they end up being worth. Of course they pick out the best stories and phenomenal values to feature on the broadcast, but one can only hope.

I have picked so many interesting items that it was difficult to choose Since we are only allowed to bring two items to appraise, I am bringing the following: 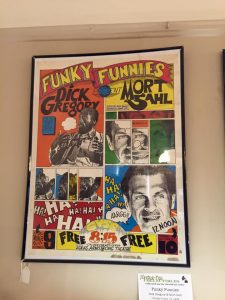 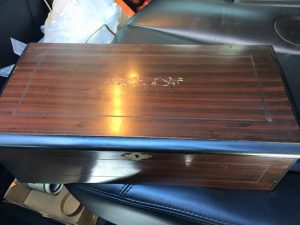 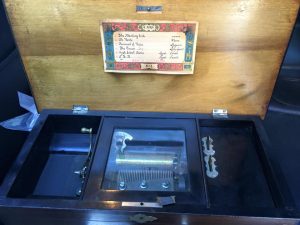 Inside the 1920s Swiss-made music box

The poster from Grand Valley State College (now Grand Valley State University) is from a pair of 1972 shows by humorists Dick Gregory and Mort Sahl. It was hung on campus and not made to last. I have not seen another like and and the only listing of it online is in the university’s library. This was picked at an estate sale for $10.00.

The music box is Swiss made and there is a faint hallmark that can be seen on the mechanism that suggests it was made around 1922. The motor works well and all of the teeth are attached and play loudly. The interesting thing about this music box is that it plays six 30-second arias. When it reaches the end of an aria, the mechanical mechanism will move the drum over to play the next one. After the sixth aria it will move the drum back to the first position. This was an auction buy which I forgot what I paid.

If you want to following along, you can follow the various social media outlets we participate:

It is common for people to use the hashtag #antiquesroadshow on all of these sites. I hope to remember to use this tag.

Have a good weekend!

Subscribe in your calendar and never miss a show!