Loving sports collectibles and the moments they remind us 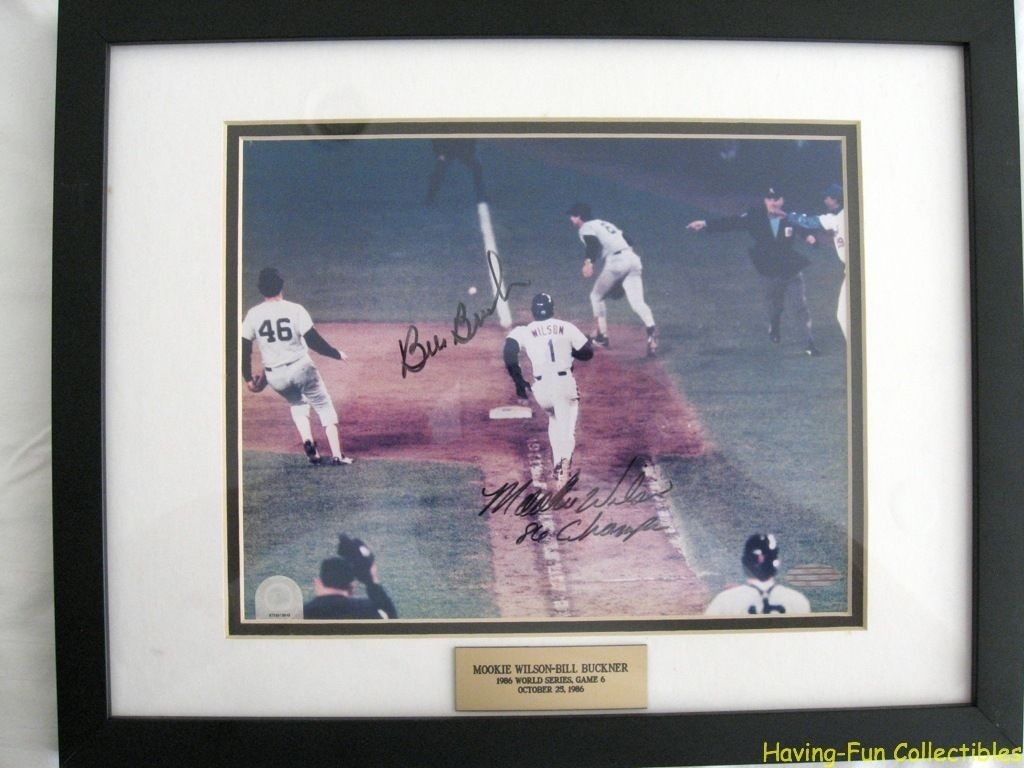 “Off the angle and spin” as Mookie Wilson charges to first base after the balls rolls through Bill Buckner’s lets. Autographs certified by Steiner Sports!

Sports collectibles can connect us with our sports heroes and the great moments in sports. One of the greatest moments in baseball, in fact the #3 ranked moment according to MLB Network, was Game 6 of the 1986 World Series.

Calvin Schiraldi, the former Met, started the bottom of the 10th inning with the Red Sox leading 5-3 getting Mets second baseman Wally Backman to fly out to left field and Keith Hernandez to fly out to center. Gary Carter, who said he did not want to be the last out of the World Series, singled into left field bringing the pitcher’s spot in the order up next. Rather than have pitcher Rick Aguilera bat, rookie Kevin Mitchell was called back from the clubhouse to pinch hit. Mitchell was allegedly booking a flight home after Hernandez made the second out. Mitchell singled to left-center field moving Carter to second. Series MVP Ray Knight then singled to center scoring Carter and Mitchell advanced the third.

With the score 5-4, Red Sox manager Bob McNamara had seen enough from Schiraldi and brought in Bob Stanley to fact the switch hitting center fielder Mookie Wilson. Wilson worked the count to 2-2 on seven pitchers. On the eight pitch, Stanley threw a pitch that was too far inside and in the dirt that could not be handled by catcher Rich Gedman. The ball rolled to the backstop allowing Mitchell to score from third and Knight advance to second. The game was tied.

It was a full count to Wilson with the sellout crowd at Shea Stadium on its feet. Wilson fouls off the next pitch quieting everyone for a moment. On the ninth pitch… well… let’s let NBC’s Vin Scully take over:

“ So the winning run is at second base, with two outs, three and two to Mookie Wilson. [A] little roller up along first… behind the bag! It gets through Buckner! Here comes Knight, and the Mets win it! ”

“ If one picture is worth a thousand words, you have seen about a million words, but more than that, you have seen an absolutely bizarre finish to Game 6 of the 1986 World Series. The Mets are not only alive, they are well, and they will play the Red Sox in Game 7 tomorrow! ”

“Tomorrow” was delayed because of rain. Mets manager Davey Johnson sent Ron Darling to start the seventh game as scheduled. McNamera benched Dennis “Oil Can” Boyd who struggled in Game 3 in favor of Bruce Hurst. Hurst was already 2-0 against the Mets and, as a left hander, the Mets were considered weaker against lefties. With fantastic middle inning relief from left-hander Sid Fernandez and the bat of MVP Ray Knight, the Mets won their second World Series in their brief history.

Now you can own a piece of that history. This is an 8X10 photograph of that play autographed by Mookie Wilson and Bill Buckner expertly framed and certified by Steiner Sports. At $200, it is a bargain collectible for anyone’s collection!!

Subscribe in your calendar and never miss a show!